Perform Your Tashlich Prayer on Our Virtual Tank

* This Year dare to do something both Traditional and different at the same time why not ask a fish store ( aquarium) if you can performTashlic at one of their tanks , Many people simply do not live near a moving body of water that fish swim and I'm more than sure that they would accommodate a large temple group or individual if you ask,and if your shut in why not use my virtual Tashlic Tank. be well and a good year to all...Don''Moses'' Lerman

*A tank such as this on will be sufficient, lets start a new Tradtion for 2009

Commenting Has Been Suspended For This Series
A First Of Ten Stories "A Moses News.Com Exclusive!*click picture to enlarge

*
In Jan. of 1998 that Allan Schwartz an interfaith nutrition network volunteer had urged me to enter the Ben's Matzo Ball contest. Allan had known me when I was 289lbs and saw the transformation to a svelte and muscular 142lbs, It didn't interest me .Again the next year he nudged me to enter still no interest. In late 1999 my nephew said look / all your life your bragging how great an eater you were , show me what you can do put up or shut up. I went to the Bens express in Huntington mall , there I met Kevin Lipsitz and his then future wife Lorraine for the first time . there were many heats as the stage only accommodated 4 people at a time . the first heat my nephew was in with a Steve "'the Matzo man ""Morrison who ate a whopping 10 to take on an early lead. My group went next , I never competed before I stumbled in the beginning on my third Matzo ball, got my composer back and continued on , I remember so one yelling from the crowd look he's like a machine , then someones creamed from the crowd ''he's an animal'' as I went past the second bowl of 5on to uncharted territory of 12 matzo balls in 2 minutes 25 seconds. I went on to the finals having only 3hrs of sleep in 48 hrs to win with a world record of 12 in 5min 25 sec. Then Mayor Rudy Giuliani presented me with the 1st place trophy it was the greatest moment of my life...Next being crapped on by Public relation firm hired by Bens Deli
posted by Don "Moses" Lerman  # 3:54 PM 0 comments

*Click Picture Story #2After the 2000 Bens matzo ball contest , I litery didn't leave my house for nearly a month taking telephone radio and T.V. interviews .as the 2001 contest qualifiers approached I made an appearance at each qualifier as defending champ. a Neighbor of mine said that they read a N.Y. Newsday article about the upcoming contest and it lists Russel Machover (1999) champ as the 2000 defending champ and an interview with Charles Hardy even before he qualified about his thoughts on his chances in the upcoming event, I saw red When I saw the article , why was I omitted from that article as champ and all that i did for Bens Kosher Delicatessen visa vie the month of telephone interviews, I called Steve Haweli of Word Hampton the Public relation firms that Ronnie Dragoon (Bens Deli Owner) hired, Steve Haweli Was as crude and rude as they come , he cursed me out with language as to make a sailor blush, F--ck You put that in your F--ckin Matzo ball pipe a smoke it was his response, what I did for you , You F--in Ingrate . I responded , '' you did nothing for me I get no salary or pay what ever you did you did for Ronnie('' Dragoon The owner of Bens Deli) the next day at 5 am I was at Bens Deli Manhattan for a shoot with Larry Hoff on WPiX 11 N.Y. I told Ronnie That I wont be spoken to in that matter by Hawelli and that if he doesn't straighten Hawelii out he can forget me defending my title ,well that afternoon there was a meeting of the Brain Trust at Ben's , Curtis Sliwa was in attendance I stayed late for the evening qualifier as champ, out exits Haweli and Ronnie dragoon . Hawelli say that to make it up . he will have me on the morning show with Sliwa right before the contest starts . well I was sick all week the antibiotic never worked and I had 102 fever and on my way to to contest i fell on the wet floor on the L.I.R.R. and broke my left index finger * my eating hand. I felt it was obligation to continue with the contest, five minute before the contests was to start , Haweeli calls me to the phone for the on air interview, Curis Sliwa went on to say the jews are finished''no more sons of Moses'' NO more Jewish champs. I was taken aback by him injecting race into the contest, He said it again '' The Jews are finished "were going to have a black champ,Thou I am Jewish I never thought of myself as the Jewish or white Champ I was a champ for all people Its a shame that this was done to me ..enough said ....

Don Lerman Snubed For Judge At This Years Canoli Contest 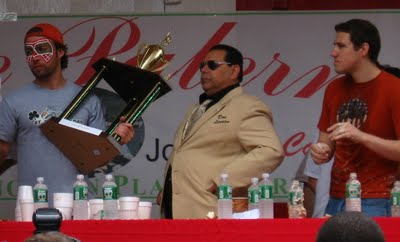 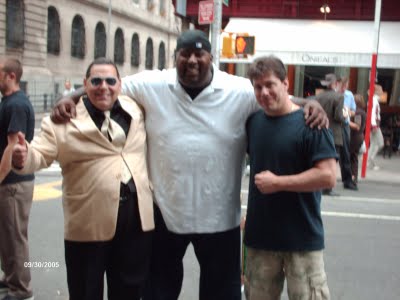 Don Lerman was not asked to be the Head Judge this year by George and Rich Shea as in years past. Don Lerman when reached his home Lermansaid he was saddened by the snub'' For all I did for them and the IFOCE Its a shame that they snub me , not even a courtesy call on my 6oth Birthday a milestone , I bet they never forget Sonya's or Chestnuts birthday" Lerman who helped put competitive eating on the map, also went on to say that after being tapped as head judge last year , an anonymous poster on Eat Feats went on to say that he will just be there for show , a figure head so to speak and that Ed Jarvis and George Shea will be doing the actual judging , this hurt Don Lerman . Lerman went on to say that he is doing well and is still in the process of getting his dental implants and wears a full upper plate temporary and is in good health.
posted by Don "Moses" Lerman  # 11:36 PM 0 comments