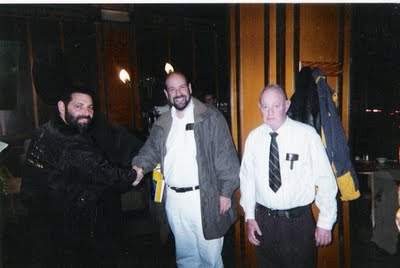 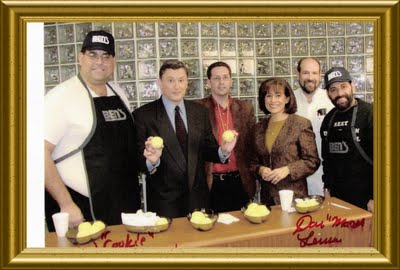 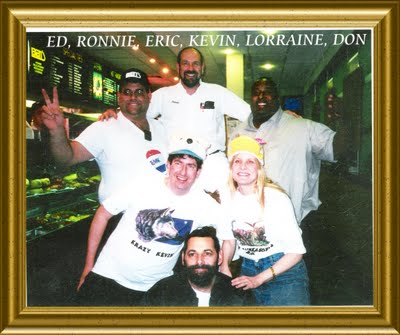 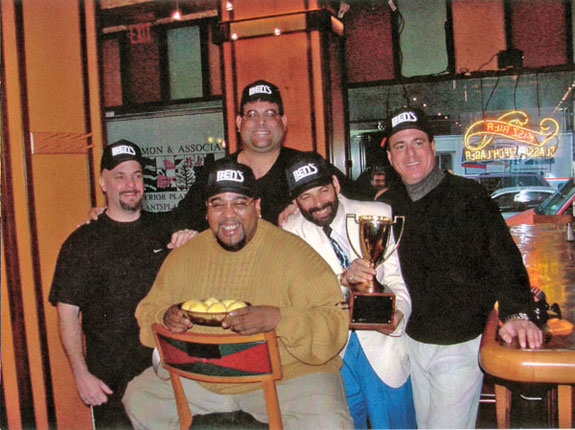 I was at Roosevelt Field Food Court and low and behold the Bens Exspress Deli was closed , at first I thougt it was s Jewish Holiday but it wasn't, what they ( Bens) need is to Bring back the Matzah ball contest, when the contest was in place as a yearly event , the sales must have been brisk it was well publicized, when I won the 1st place title , I literly didn't leave the house for a month ,I was doing radio interviews and was invited to Japan as champ.Baldwin store is shut down as well as Huntington I believe that bayside is closed also . 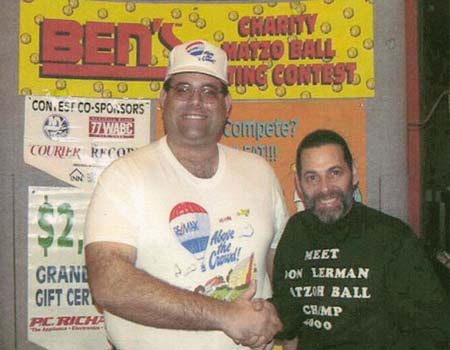 All 3 Amigos Race to Shed The Lbs.In the quest for good health and a return to yesteryear all 3 Amigos ED Jarvis ,Don Lerman And Now Kevin Lipsitz have decided to hit the diet trail who will be the sveltest by Next July 4th? we at moses news .com would welcome your thoughts on this subject 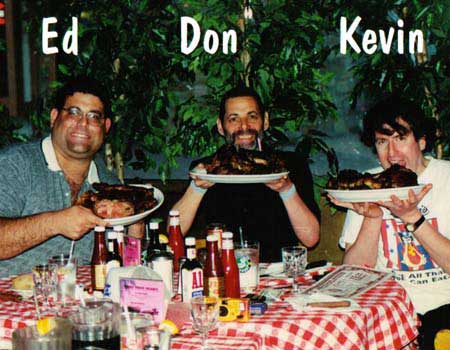 Don Lerman At Thanksgiving Contest with CNN's Jeanie Most 2002
posted by Don "Moses" Lerman  # 1:20 AM 0 comments 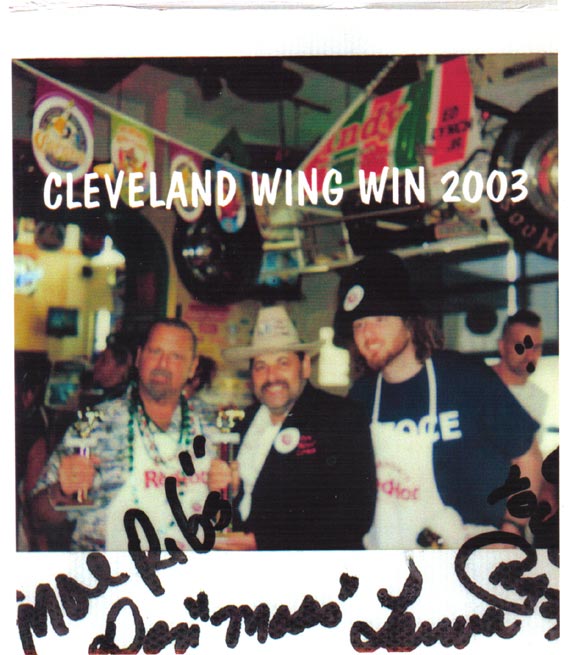 There is only one time I remember watching the Montel Williams Show. He was interviewing a guy named The Wingador. He was a competitive eater who had lost a match because he was ill at the time. A rematch was about to take place on Montel's show.

I'd seen people eat hot dogs and pies in contests but never wings. This guy was amazing to watch. He had a rhythm that was slow but steady -- about the tempo of "Lady in Red."Anyways, the wing would go to his mouth and come out clean. What amazing fluidity this guy had. And his wife was hot and by his side cheering him on. He won that match.

Why did he eat all of those wings? And what makes somebody decide that instead of chess or basketball that the choice competitive route is eating? Crazy Legs Conti is an expert on questions like these. He is the star of Crazy Legs Conti: Zen and the Art of Competitive Eating. He recently answered a few of my questions.

What inspired you to compete?
I was a fan of competitive eating in the late nineties but only turned pro in 2002. The late nineties, aka "The Trophy Era" featured a guy named, Don "Moses" Lerman. I would watch Don compete in hot dogs or matzo balls and it was it inspiring. I believe Don was the first person to cross state-lines to promote pro-eating. He was competitive eating's first carpetbagger and I longed to compete against him.

One of the highlights (and at the same time low point) of my eight year Major League Eating career was blowing my back out during a wing eating contest at the Quaker Steak and Lube in Sheffield, Ohio -- losing by two wings to Don. My back has recovered, but sadly Don retired from the sport a few years ago. He still holds the butter record which I hope no one ever breaks.

What foods have you competed with?
Basically anything Major League Eating puts on the plate. I've eaten well-known American foods like Nathan's hot dogs and Krystal hamburgers to more worldly fare like Pelmeni and Posole.

One food that I've never competed in is jalapeño peppers. I can't handle the spicy discipline. I start crying and drooling. Three bites in I look like a wet glazed donut. The La Costena "Feel The Heat" Jalapeno Eating Championship Challenge is taking place on Sunday, September 13th in Chicago, but I can't make it this year. However, before I retire I'll get there – even if I come in last and am curled in the fetal position for a week after the contest.

What's your strategy for hot dogs?
My personal best in hot dogs and buns is twenty-five in ten minutes, but that's not a top ten number. I've got a real mental block when it comes to dogs. If I don't hit thirty by next year, I might not make the final table on July 4th. I've really got to refocus in the off-season. I think I may re-read, "The Inner Game of Tennis". Pre-visualization might be the key.

What's your strategy for oysters?
Head down to the Acme Oyster House in New Orleans for the world championship and simply eat all I can. And then drink all I can in NOLA. It's simply the greatest city on Earth.

Do you do wings as well?
My Meat Umbrella technique© is currently winding its way through the US Patent and Trademark office. It's great for the pro-eating and even better for the casual diner, because it leaves one hand sauce-free so you can hold your beer. The Buffalo Wing Festival in Buffalo, N.Y. on Labor Day is the best place for wing experimentation.

Have you competed against the Wingador?
I was honored to eat against Bill "El Wingador" Simmons in Wing Bowl 13. I consider it the Wing Bowl to end all Wing Bowl's as the Philadelphia Eagles actually made the Super Bowl that year. Tailgating outside the Wachovia Center was still allowed so the parking lot basically became an apocalyptic riot – bonfires, explosions, fifteen thousand people were turned away. It was the greatest drunken bacchanalia in Philadelphia history. It was a bigger party than when Ben Franklin discovered electricity.

He had a giant belly when I saw him. How do you keep fit?
El Wingador belly is actually pretty fit – he is on the celebrity boxing tour these days. I jog and go to the gym. I'm slated to run the New York Marathon this year, but my mileage is down so I am trying to cram in some long jogs in the next three months. I much prefer the carbo-loading to the jogging. If you see me in the thirty-thousand runners this November, throw me some french toast. I'll need it more than anybody else.

What's the hardest food to take down?
My albatross has always been cannoli. I've finished second or third for the past seven consecutive years. The contest kicks off the Feast of San Gennaro in New York City, but there is no prize money, often the league forgets a trophy, the stage is tiny and can barely support the eaters, but it's a contest I love.

It's the last pure contest on the circuit – a throwback to the Trophy Era. I'm going for the title, but honestly, at this point, if I remain the mascarpone bridesmaid and never the bride – so be it. I have made peace with my cannoli deficiencies. I am really more of a Sfogliatelle man anyway.

What are you currently listening to?
My favorite band, The Tubes - the greatest band in the history of music. In fact, I saw you open for them at BB Kings a few years back. It's not easy to rock dinner theater but both you then Fee Waybill and the gang did beautifully.

The Tubes have been the soundtrack to my life. I'm not sure I can put into words what their music has meant to me. The intersection of pro-eating and The Tubes occurred this past April as they headlined the Stockton, California Asparagus Festival after the deep-fried asparagus contest. I was on the east coast defending my corn-on-the-cob eating world record. If I had a flux capacitor, I could have eaten in both events and heard The Tubes. If they can invent Twitter, why can't we have time travel?

What are you currently reading?
I'm a lover of a good dive bar and Chris Campion's Escape From Bellevue is theThe Odyssey, of well, dive bar odysseys. It's got sex, drugs, rock-and-roll, mental breakdown, recovery and the perseverance of the human spirit. And it's funny. I'm reading Tony O'Neill and Kenny Mayne this summer too. I like non-fiction dark comedy. It's hard to read books in dive bars, bad lighting. I recommend the beach or at least the subway.

What else inspires you?
Beyond food? Besides good music and literature? I like the new Comedy Central show, Michael and Michael Have Issues. The world needs a good laugh.

After giving the Greenwich Village KFC/Taco Bell a passing inspection, the city’s Department of Health had to close the store down after TV camera crews and passerbys videotaped rats roaming around the store after closing. This story brings back memories of the Dunkin Donut rat debacle that occured several years ago in the city, where a rat was photographed in the window front. In the video, several rats are seen climbing and running around the tables and chairs of the restuarant in plain view. This situation has now left New Yorkers wondering about the validity of the Health Department’s restaurant inspections. The Greenwich Village KFC/Taco Bell is one of 20 other such stores owned by ADF.

In response to the video that has been shown all over TV and the internet, Health Commissioner Thomas Frieden said the city’s failure to immediately shut the Greenwich Village KFC/Taco Bell after learning of the rat problem was not acceptable. The inital inspector of that store has now been removed from duty and other inspector’s reports will now be re-examined. ADF has also made a statement that they are embarassed with situation and that they will be ordering reinspections for the other stores in New York City.

1:22
Rats at Taco Bell/KFC in NYC
There aren't just one or two rats, but 10 or more you can see climbing on high chairs and everything. Just nasty!
posted by Don "Moses" Lerman  # 12:14 PM 0 comments

The record for the biggest matzah ball has been set in New York after it was baked in New Jersey - and the ball was certainly a sight to see.

According to HuffPo: Weighing 267 pounds and made from 1,000 eggs, 80 pounds of margarine, 200 pounds of matzah meal, and 20 pounds of chicken base, the giant matzah ball easily set the Guinness record. The ball, which stood three feet high, was baked by Noah's Ark Original Deli in an oversized kitchen in New Jersey and then given a police escort to Manhattan where it was unveiled and then devoured by a waiting crowd.

Go here for a larger photo!

Don Lerman Nearly Chocks To Death On Hot Dog Roll.I had company over for some barbecue today,when my company went home there was 4 hot dog buns left over, about 9:45pm I decided to finish the buns , I picked up the first bun and ate it , I started on the 2ND , and the bun got enlarged in my throat. I was alone , I panicked , I wasn't able to breath, I was dieing ,and I knew that if i didn't chock up the roll that I would be dead in a matter of a minute or so. I tried the Heimlich maneuver on my chair , it didn't work , I was too fat
. I drank some hot water to soften up the roll and forced it down my throat , by the grace of G-d it worked . G-d had punished me for pigging out on Hot Dog Rolls. I must stress never practice for a contest alone, its not worth it , this was awake up call to put the brakes on needless eating and stick to my diet.end 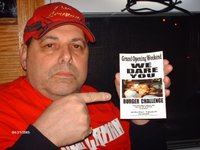 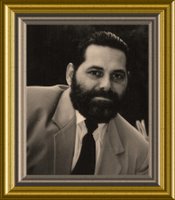 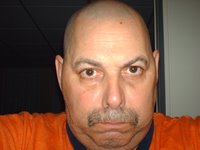 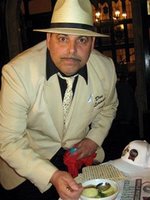