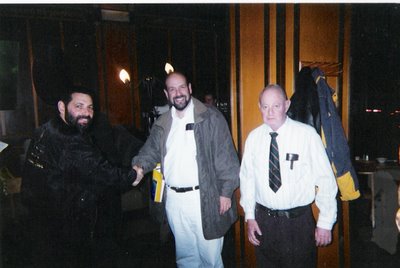 I first met Allan Schwartz back in 1998. He was a volunter at N.C.M.C at the coffee shop. He urged me to enter the Bens Matzah ball contest back in 1998 , I wasn't interested , again the next year in 1999 he once again asked me to enter , I declined .In 2000 after hearing that the 1999 winner only ate 10 matzah balls to win, he asked me once again and this time my nephew also got into the act and asked me to go , as I always braged that I wa s a great eater , he said ( my nephew ) lets see what you can do. Allen Schwartz was a volunter for the Interfaith nutrishion network . I worked along side him at the Mary Brenan kitchen as a volunter myself , after the end of the Bens matsah ball contest , we grew apart and didnt see or hear from him . I recently ran into another of the soup kitchen voluners and inquired about him and was told that he had passed away a few years ago , how sad . you would think that bens would have mentioned it on their web site or something ,after all he helped raise money for their charity at all their contests, If it weren't for him I wouldn't be involed in competive eating , I 'm grateful to him for that& this story is dedicated to him ...end
for great tee shirts click here...http://www.tshirttank.com/
posted by Don "Moses" Lerman  # 11:17 PM
Comments:
I remember Allan. Nice guy. Came around with the donation cup. At the greenvale matzah ball qualifier in 2004 He sat down and farted right in front of the short girl that was part of Jarvis's entourage. It looked as though she was going into convulsions or having a serious laugh attack. Allan always looked forward to the Ben's contest. It wont be the same without him. He will be sorely missed.

as a follow up to my story , anyone who was at any of the bens contests , remembers allan, he was a ficture at all the bens contests , I miss those days of old. they were good times in the early days of competive eating thanks Brian for your coment and good thoughts..don lerman