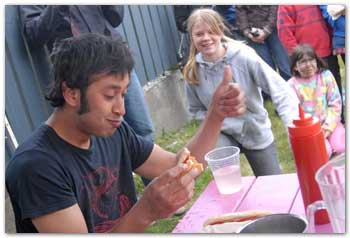 On Your Mark, Get Set, Eat!

It wasn’t an international record – not by far – but it was good enough for Tofino.
Tom Steele took first place in the 2008 Sugar Shack Hotdog Eating Contest Sunday by downing six hotdogs and buns in five minutes.
“I’m really stoked,” said Steele. “The last bun was really hard to do.”
A total of 10 competitive eaters showed up to the Sugar Shack parking lot on Campbell Street for the chow-down at high noon.
During five minute heats, two competitive eaters, seated at a picnic table, faced off against each other and a table of hotdogs.
Competitors were given five minutes to eat as many hotdogs as they could.
Hotdogs were only counted as eaten once entirely swallowed.
Steele said he followed a simple strategy. He downed five hotdogs first before the five buns, and then he tackled the sixth hotdog and bun.
Cheering on the competitors at one point was a crowd of more than 70 adults and children.
Even a pair of local paramedics showed up – just in case.
Luke Mussato, a Sugar Shack co-owner and competition organizer, dubbed the competition a tribute to gluttony.
“It’s April, and it’s slow, and I have time, and it’s fun,” he said. “People love hotdogs.
“The West Coast has never seen this before.”
Mussato said the event was not sanctioned by the International Federation of Competitive Eaters, but he said he’ll consider applying for sanctioning if he holds the contest next year.
The current hotdog eating record is held by Joey Chestnut who downed 66 Nathan's Famous Hot Dogs and Buns in 12 minutes on July 4, 2007.