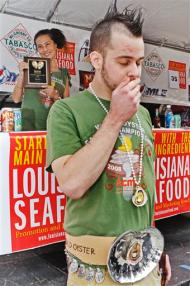 NEW ORLEANS (AP) — Patrick "Deep Dish" Bertoletti looked down at the litter of empty oyster shells in front of him and savored the sweet taste of victory. For Crazy Legs Conti, the bitter taste of defeat could be washed away only by beer.

The Acme World Oyster Eating championship belt — leather, with a silver dish featuring an oyster on the half-shell — hung on Bertoletti's skinny hips. The 22-year-old Chicago resident took the title Saturday by slurping 35 dozen of the big bivalves in eight minutes.

"I could probably do a couple dozen more, especially if they were charbroiled," said Bertoletti, who holds the endurance oyster-eating record, having downed 53 1/2 dozen in 2007 before calling it quits. "Although they're great raw."

Conti, the defending champion, tied for third, sucking down 24 dozen.

"They're supposed to be an aphrodisiac," said Conti, whose real name is Crazy Legs. "But I think that's only true for about the first three dozen. When you get up higher than that, you don't want much activity for a while."

A dozen professional eaters who compete in Major League Eaters events year-round squared off at the French Quarter Festival on Saturday.

Rules for the oyster tournament forced contestants to use forks, not lift the shells to their mouth, and to finish all the oysters from a tray before starting a new one.

Officials in striped shirts stood beside each contestant and flipped a counter as each dozen was consumed.

Many of the competitors wore gloves to handle the shells; all carried several bottles of water, cold drinks or beer to help them keep their mouths and throats lubricated. Lee carried a thermos of hot water but said she didn't feel the need for it.

"Oysters are pretty liquid," said Lee, who weighs 105 pounds despite being on the pro-eating tour for the past year. "I didn't need it."

Tim "Gravy" Brown — ranked 13th in the world — was disqualified when he had what professional eaters call a "reversal of fortune." He vomited after 14 dozen.

"I feel good about that; my goal was 15 dozen," Zukowski said. "I had only eaten one raw oyster in my life before this and I thought I'd vomit after it. I hate them."